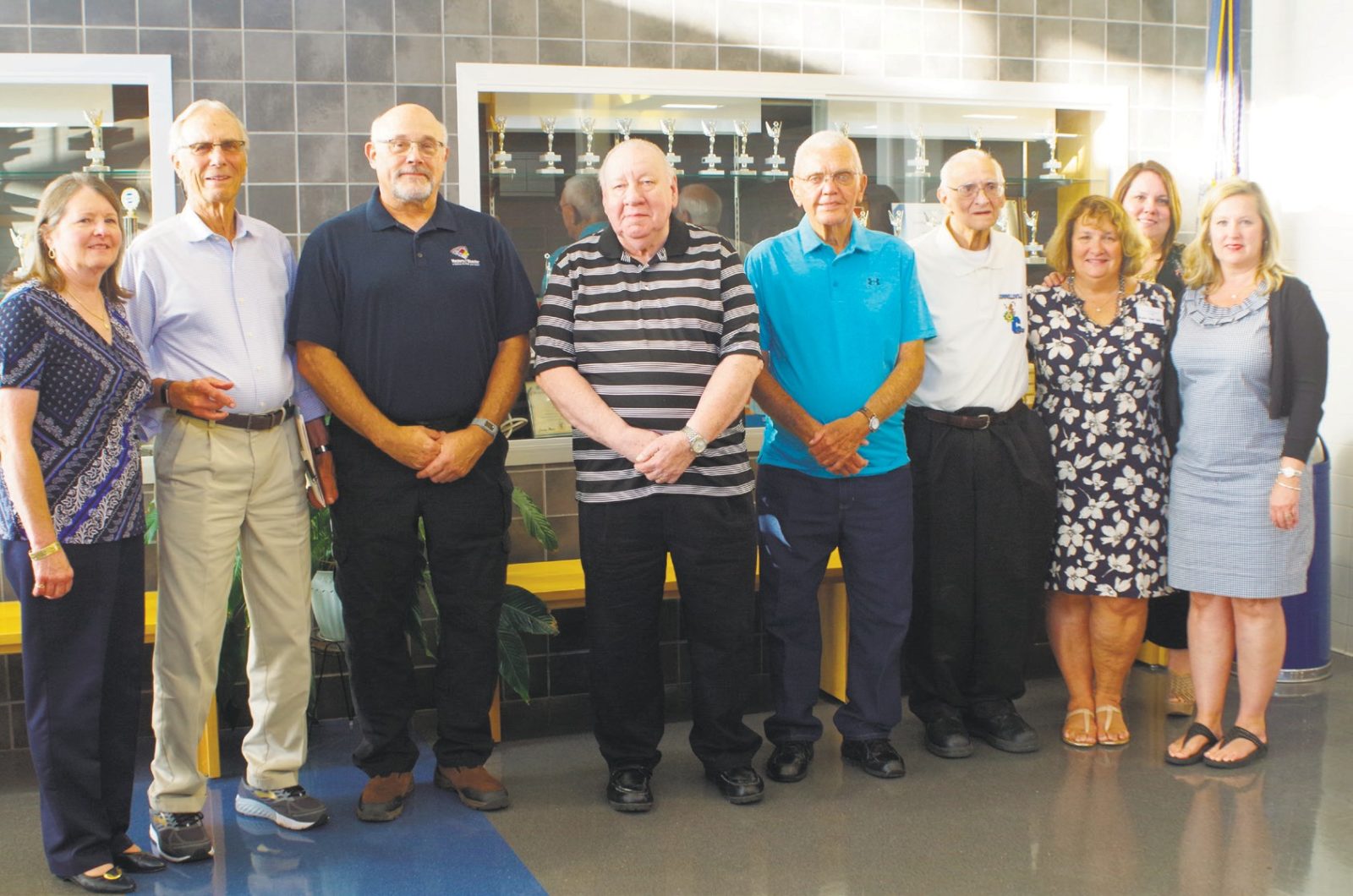 It was an emotional evening at the ninth annual Falcon Foundation Hall of Fame dinner Friday as seven new members were inducted.

“Each of the 68 so far and the seven this year are beyond deserving,” said Bob McLuckey, president of the Falcon Foundation. “This year we had 50 nominations to consider.”

Among the Class of 2018 inductees was Timothy Bollibon, a 1986 graduate of Connellsville Area High School who was killed just five years later while serving aboard the USS Austin during Operation Desert Storm.

“His dream was to become a member of the SEAL team. He failed the physical four times due to past sports injuries, but his persistence paid off and he eventually passed and fulfilled his dream,” said Sherwood Hughes, who gave the acceptance speech on behalf of the Bollibon family.

“I want you to recognize the price that’s paid for us to be here and to have all we do here in the United States,” McLuckey said.

Bollibon was given a standing ovation by those in attendance as Hughes left the podium.

Elisa Harris, a 1974 graduate of Connellsville Area High School, is currently on assignment in Europe and was unable to attend the ceremony, McLuckey said. Harris sent a letter expressing her regrets at not being able to attend and crediting one of her teachers, Judy Keller, with inspiring her career by telling her about the Congressional Page program.

Harris served as a page to Congressman Thomas Morgan who chaired the House International Relations Committee and Harris stated that she often sat in on the committee meetings.

“For nearly 40 years, I’ve been able to hold a variety of positions…regarding ending the proliferation of chemical and biological weapons,” Harris wrote. “If it had not been for a teacher who sparked my interest in public service, I may have had a very different life.”

Robert Martin, also a 1974 graduate, also entered the Hall of Fame. He was recognized for his many years of service to the country in the military and as a National Park Service Protection Officer. His final assignment before retirement was as the National Security and Intelligence Program Manager at the NPS headquarters in Washington D.C., a position created following 9/11. He developed the homeland security program at Westmoreland County Community College and teaches public safety and homeland security courses at several universities.

Martin accepted the award by taking the audience a bit farther back in his life.

“A four-year-old was adopted by a couple in the Dunbar mountains,” Martin said. “They taught me to appreciate the great outdoors. Scouting was a big part of my upbringing. One merit badge called for me to spend time with a forest ranger.”

Martin said he was also influenced by his conservation class in high school, but the selling point for his career as a park ranger came the day he passed Fort Necessity while working as a National Guard recruiter.

“I saw this man with a really cool hat,” Martin said, describing the ranger Stetson.

After pulling over and talking with the man for a while, Martin said he found his new career path.

Dr. J. Harold Dull, a 1920 graduate, was represented at the ceremony by his three granddaughters, with Kristen Sepp Wolfe, the oldest of the three, giving the acceptance speech.

“My grandfather was born in 1902 and lived on Cottage Avenue. He delivered groceries with a cart,” Wolfe said of the man who grew up to be a dentist, mayor of Connellsville, president of the Chamber of Commerce, director of Connellsville Industrial Development Inc. and chairman of the city’s Sesquicentennial celebration in 1956.

“When I look at all the things he has done, I wonder how he had the time,” said Ken Washington as he introduced Wolfe. “And the icing on this community service cake, the eternal flame War Memorial on Pittsburgh Street was his idea.”

Dull practiced dentistry in Connellsville from 1927 until 1975.

“It was difficult starting a dental practice at the start of the Depression and he once took a chicken as payment for pulling a tooth,” Wolfe said. “My grandfather embraced progress and wanted better for the city of Connellsville.

“My dad says the harder you work, the luckier you become, so I guess J. Harold Dull was the luckiest man around,” Wolfe said.

Wilmer Burkholder, a 1932 graduate of Connellsville High School and a longtime teacher and track coach, also holds the distinction of serving as a teacher for 35 years without missing a single day of work. He passed away in 1970 and his son Dale accepted the plaque in his father’s honor.

Dale Burkholder said he was starting to develop asthma when he started high school, but since his father coached track, he thought he should try out for the track team.

“My father was very fair with the guys who tried out. On the third day we were going up Springfield Pike and he said ‘Son, I’m going to have to kick you off my track team.’ My own father!” Dale Burkholder said with a smile.

Dr. Daniel Taylor, who graduated in 1951 from Connellsville, came back to teach in the district for a period of time.

His career also led him to the State Superintendent of Education position for West Virginia.

He was appointed by President Jimmy Carter as the First Assistant Secretary for Adult and Vocational Education when the U.S. Department of Education was first established. Taylor said education was always stressed in his home as a child.

“My mother was a school teacher and my dad worked on the railroad. He only went through eighth grade, so he was very supportive of us completing high school,” Taylor said.

Taylor said that thanks to the G.I. Bill, he and his siblings also had the opportunity to go to college. Taylor was emotional as he recalled his parents and siblings.

“My only surviving brother is 91 years old. He served in World War II with the occupying forces. He lives in Monterey, Calif., and can no longer travel. If my late wife were here and heard about this, she would have said ‘You? Are you sure it’s you?’” Taylor said.

Though many family members have passed away, Taylor was still surrounded by friends and family, including a two-year-old great-grandson he hopes will some day remember the event.

“This is a wonderful tribute to Connellsville High School,” Taylor said of the Hall of Fame.

The final inductee never attended Connellsville schools and never taught in the district, but has been a part of the Connellsville Falcon Basketball program since 1967.

“Maybe being part of an organization is no big deal, but when you multiply it by 51 years, it becomes a big deal,” McLuckey said as he introduced Anthony Polidora.

“When he came to Connellsville, he got involved in basketball, not the way most people do as parents of players, but as someone who loved basketball,” he added.

McLuckey said Polidora has been the one constant with the team, no matter who was coaching, no matter whether the team was winning or losing. Polidora helped form the original Falcon Boys Basketball Association and has been its leading fundraiser over the years.

“I’ve met some wonderful players, coaches and parents,” Polidaro said in the briefest acceptance speech of the night.

The inductees were then taken in classic cars to Connellsville Stadium where they were recognized prior to the Friday night football game.