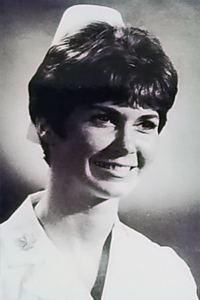 Received her R.N. Degree in 1957 from Shadyside Hospital School of Nursing in Pittsburgh. Having joined the Army Student Nursing Program, entered the Army Nurse Corps in 1958. During the 1960s, she served overseas tours of duty at the 97th General Hospital in Frankfurt, Germany and the 93rd Evacuation Hospital in Vietnam. Appointed Head Nurse of the VIP Ward and Presidential Suite at Walter Reed Army Medical Center, coordinating the overall nursing personnel in care of high ranking military and government officials and other dignitaries from 1968-1972. The first recipient at Walter Reed Army Medical Center to be given the “Meritorious Service Award”, recognized for exceptional service in providing nursing care, including President Eisenhower in 1969. Selected as the first female White House Aide representing the Army from 1970-1972. Retired Lieutenant Colonel, receiving the “Legion of Merit Award”, the highest decoration bestowed by the Army Medical Department.

Valedictorian of Connellsville High School’s class of 1948. Graduated Cum Laude from Harvard University in 1952. Graduated from Western Reserve University’s School of Medicine in 1956. Had a long career with the Center for Disease Control in Atlanta, serving as the CDC’s Assistant Director and as the United States Assistant Surgeon General. Served as a Clinical Associate Professor at Emory University’s School of Medicine and the Morehouse University’s School of Medicine. Was a member of the President’s Science Advisory Committee on the Effects of Environmental Pollution. Held such prestigious positions as: President of the Harvard’s School of Public Health Alumni Association, President of the American College of Preventative Medicine (ACPM), and Trustee of the American Board of Preventative Medicine (ABPM). Was a member of both the Explorers Club of New York and the Cosmos Club of Washington DC. 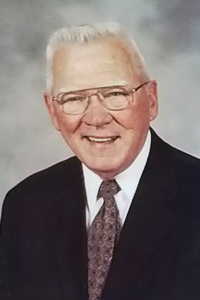 Received his B.S. in Business Administration from Waynesburg College. Served on the Connellsville City Council for eight years and on the Board of Directors of Fayette EMS for over 20 years. Served on Council at Trinity Lutheran Church where he chaired the committee that helped raise over $150,000 to renovate the church and restore its stained glass windows. Member of the New Haven Hose Company for over 50 years, chairing committees to build a new fire station and social hall, raise funds for the flags that line the city’s streets, and for Christmas lights. Presented the “Community Service Award” for outstanding service to his community in 1995 and the “Distinguished Citizen Ward” in 2007 by the Greater Connellsville Chamber of Commerce. President of the Connellsville Falcon Foundation since its inception in 2006, helping to raise over $300,000 through grants and various fund raisers, which have been used to enhance the education of the students of the Connellsville Area School District. 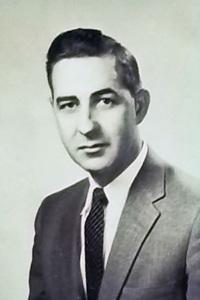 Served in World War II with the Army Air Corp in the Pacific Theater. Attended California University of Pennsylvania and the University of Pittsburgh thanks to the G.I. Bill. Served as the Head Teacher at South Connellsville School from 1951-1956 and as High School Assistant Principal from 1956 -1966. As Principal, directed the merger of the former Connellsville Joint High School with Dunbar Township High School during the 1966-1967 school year. On two separate occasions, served as the Mayor of Connellsville. Was an avid Falcon Sports fan and unfortunately died from a stroke suffered while attending a Falcon Basketball game in 1982. The Robert P. and Nina C. McLuckey Memorial Scholarship is awarded annually to a deserving CAHS graduating senior. 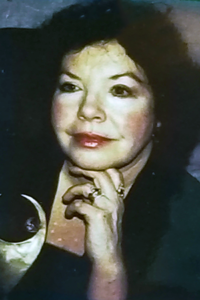 Received her Bachelor of Science degree from California University of Pennsylvania and Masters Equivalency from Penn State Extension Latrobe. Taught high school French for 16 years in the Ligonier Valley School District. Chosen from thousands of nationwide entries, two of her screenplays made the top 25 at Robert Redford’s Sundance Institute, one of which was optioned to Kevin Costner, the other spearheaded her Sleuth Sisters Mystery Series. Awarded the Greater Connellsville Chamber of Commerce’s Athena award, when her County Chronicles history column was a popular feature in the Daily Courier. Thrice recognized by both Pennsylvania’s Senate and House of Representatives for her County Chronicles Pennsylvania history series. Authored several books and magazine articles, has been interviewed numerous times on radio and television, and has been a guest speaker of various organizations across Pennsylvania. Orchestrated a public post-humorous apology in 2009 to John Y. Woodruff, Connellsville’s Olympic hero, from the US Naval Academy for the Navy’s refusal in 1936 to compete against the University of Pittsburgh’s track team if Woodruff, an African American, participated in the meet. 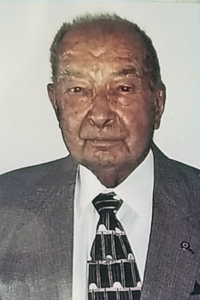 After having served in the US Navy as a gunner’s mate in the armed guard, Tressler volunteered, trained, and served as a scout and raider in the covert organization known as SACO that operated behind Japanese lines and emerged as the Navy SEALs. Notably decorated by the US Navy and Generalissimo Chiang Kai-shek for outstanding service in the China, Burma, India Theater during World War II. Served on Connellsville’s City Council for four years from 1957-1961 under Mayor Robert P. McLuckey, contributing to several significant improvements, including the West Side Hill Playground, the North End Housing Project, and an extended runway at Connellsville Airport. Served as chairman of the board that erected the sidewalk and wall at Hill Grove Cemetery, where labor was donated by the local #321 Carpenters Union of Connellsville. Served as President of Connellsville’s Fraternal Order of Eagles 493 and was instrumental in getting the Ten Commandments monument erected on the grounds of Connellsville High School in 1956. Was one of the original founders of the “Little Italy” block party on West Side Hill and has served as the president and orchestrator of the popular event since 2000. Honored as the oldest paying member of VFW, Post 21 in Connellsville.