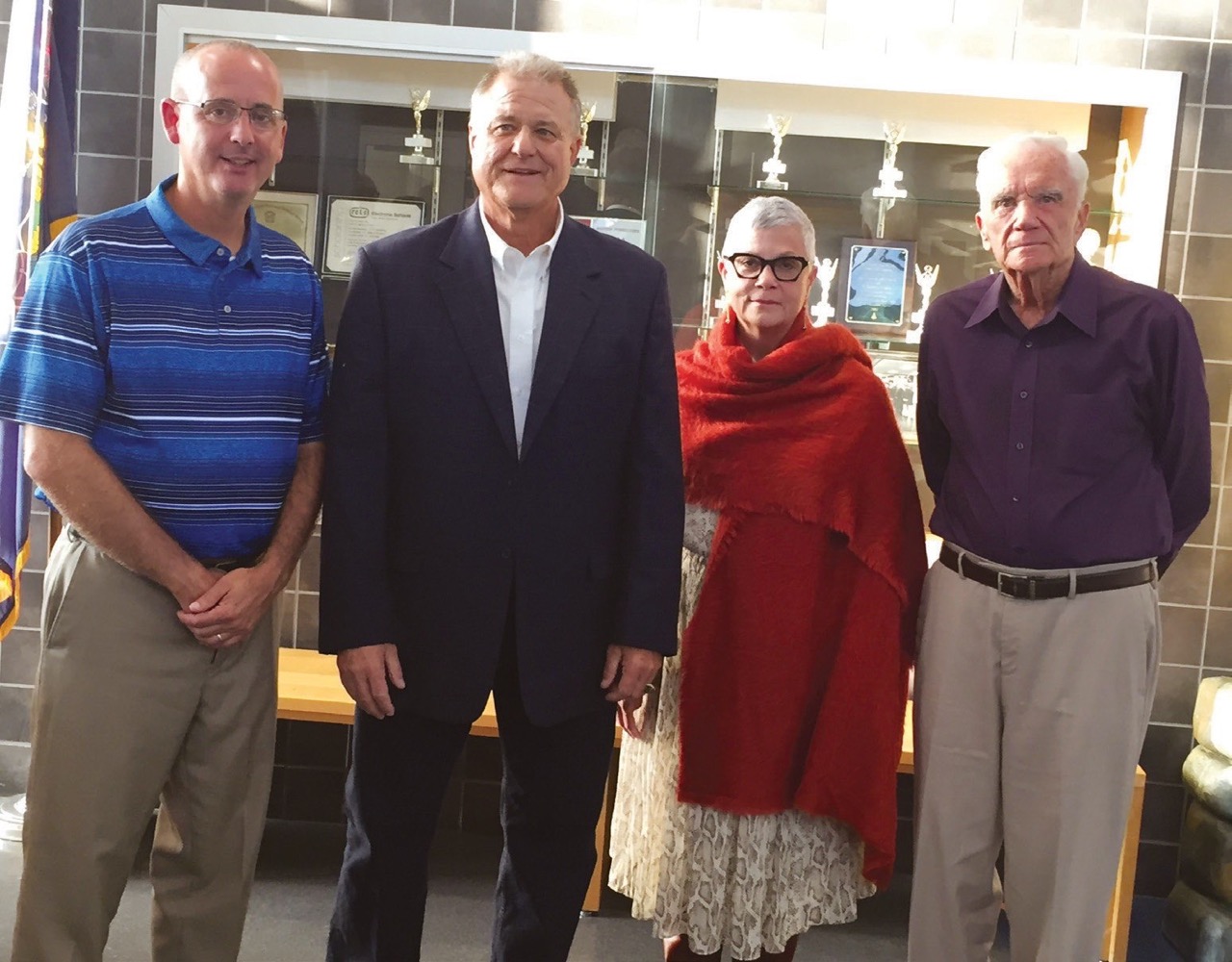 Cuneo taught vocal and instrumental music at Connellsville Area over a 36-year career. She further taught music outside the district, including 30 years at the Cuneo Studio.

Sandusky used words like creative, innovative, strong, kind and inspiring to describe her former colleague, and called Cuneo a “steamroller” when it came to getting things accomplished.

Cuneo ran off a long list of people to thank, not the least of which were her family and all the students whose lives she touched in the schools she taught.

Galasso is a former Major League pitcher with the Milwaukee Brewers and Seattle Mariners. He played on two state championship Connellsville Little League teams and distinguished himself as a member of highly successful Connellsville American Legion baseball teams.

Galasso cited humility as a key to life, something ingrained in him growing up in the Connellsville area.

“You see how other people conducted themselves before you,” Galasso said, adding he strived to follow their lead.

Connellsville did not have a high school baseball program in his time, adding he regrets few ever “saw me throw.”

Galasso said he knows no greater honor than being recognized in his hometown.

Hess is a distinguished pianist, conductor and educator in the United States and internationally. He was not able to attend the event.

Retired teacher Judy Keller spoke on behalf of Hess, saying he has worked with some of the greatest singers of this era — among his many accomplishments.

Keller said Hess apologized for his absence, told her his parents “started him out right,” and recognized former Connellsville instructors, including choral teacher Robert London.

Looking back on his youth in Connellsville, Hess said he was “in the right place at the right time,” Keller noted.

Kershey built a legendary basketball and track and field coaching career over 42 years at Coatsville High School in Chester County. A noted educator, the district’s teacher of the year award bears his name. He continues to coach at Immaculata University.

The son of a Trotter coal miner, Kershey said his father worked 46 years – losing his life to black lung disease — so “my sister could become a nurse and I could become a teacher and a coach.”

He compared Coatsville to western Pennsylvania steel and coal towns, where tough kids excelled in athletics and academics.

Kershey said coaching success came after he found out kids, “don’t care how much you know until they know how much you care.”

Sheetz received the Silver Star for gallantry in action during Operation Iraqi Freedom on Feb. 27, 2006. When a grenade was thrown inside a tank on which he was serving as a loader, he placed himself between the crew and the explosive device.

The grenade exploded as he threw it from the tank, suffering severe injuries. Sheetz died Aug. 10 following a battle with cancer.

His brother, retired U.S. Army Lt. Col. Eric Sheetz, spoke briefly about the day he learned Brian had been wounded.

“God bless him,” he said of Brian.

Swan, owner of a former furniture and appliance store, lived his life in service to God, family, friends and community.

An outstanding athlete at Connellsville High School and Otterbein University, the Connellsville Community Ministries food pantry is named in his memory and honor.

“To know Bill Swan is to be a friend of Bill Swan,” McLuckey said.

He said to get through the talk, he would not be able to make eye contact with his mom, Andrea, a retired teacher who wept as he spoke.

He discussed his father’s lifelong friendships — “they were so close to him they were uncles to us” — his life of community service, athletic prowess and incredible level of humility.

“Mom and Dad were ambassadors to Connellsville,” he said.

After the induction ceremony, the Hall of Fame members were transported in convertible autos to Falcon Stadium, where they were introduced prior to the game against Penn-Trafford.

The 2019 class is the 10th to be inducted to the Hall of Fame, which comprises graduates from the former Connellsville and Dunbar high schools and Connellsville Area High School.