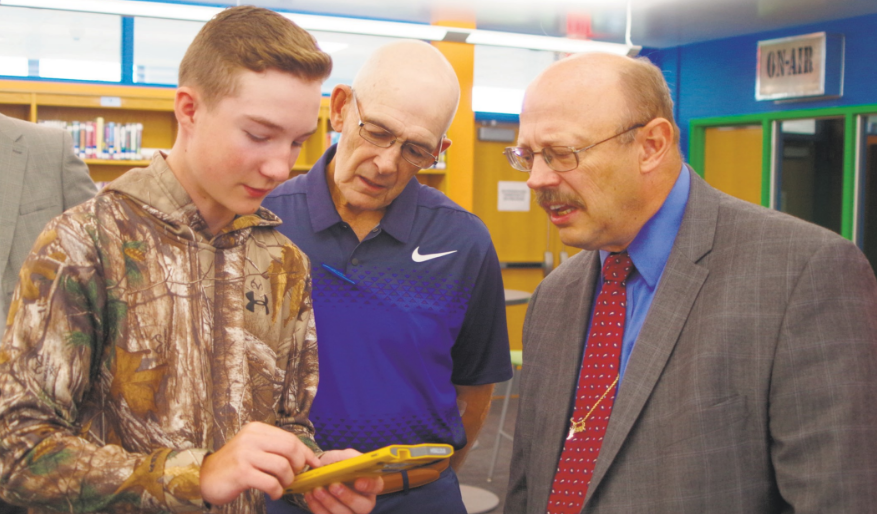 During the past 29 years, Scottdale Bank has donated about $2 million to the Connellsville Area School District, with this year’s donation going for the purchase of graphing calculators at the middle school.

Larry Kiefer, president and CEO of Scottdale Bank, had a chance to see students using those calculators Wednesday as the grant award was announced.

“We’re glad to do it. I know at one time we put computers in the elementary school and we added the Fab Lab,” Kiefer said.

Kiefer said the bank has been able to make the donations because of the state’s Education Improvement Tax Credit program.

“We go through the Falcon Foundation because we have to go through an approved nonprofit organization,” Kiefer said.

“For the last few years, we’ve been working with the district on one large project to have the biggest impact we can on the largest number of students,” said Bob McLuckey, treasurer of the Connellsville Area Falcon Foundation.

In previous years, the Falcon Foundation channeled the money into a number of projects in the district.

“I think the teachers appreciate it more now because they get to have input on the project,” said Bill Wilson, president of the Falcon Foundation.

Kiefer said he talked his board of directors into participating in the EITC program when it first started, and it has worked well for the bank and the district ever since.

“Aside from the taxpayers and the subsidies we get from the state, no one’s done more than Mr. Kiefer who has donated more than $150,000 over the last three years,” McLuckey said.

“The impact you’ve had on our students is immense,” said Dave McDonald, the acting superintendent.

High School Principal Jennifer Sanzone said the donation makes it possible for all students in the seventh and eighth grades and half the students in sixth grade to have the graphing calculators.

Julie Kezmarsky, the seventh grade pre-algebra teacher, said the teachers can call up a student’s work on the calculators and see exactly where they may be having a problem.

“We can see that and help them out on that,” Kezmarsky said.

Kezmarsky said she can also send a math problem out to the calculators and see the students’ answers within a minute in order to assess them.

“They still learn with paper and pencil too, then they get to do the fun stuff with the calculator,” said teacher Mary Katherine Sabatula.

Students Lauren Nedrow and Bryar Halfhill demonstrated their abilities with the calculators, plotting points and flipping shapes between quadrants.